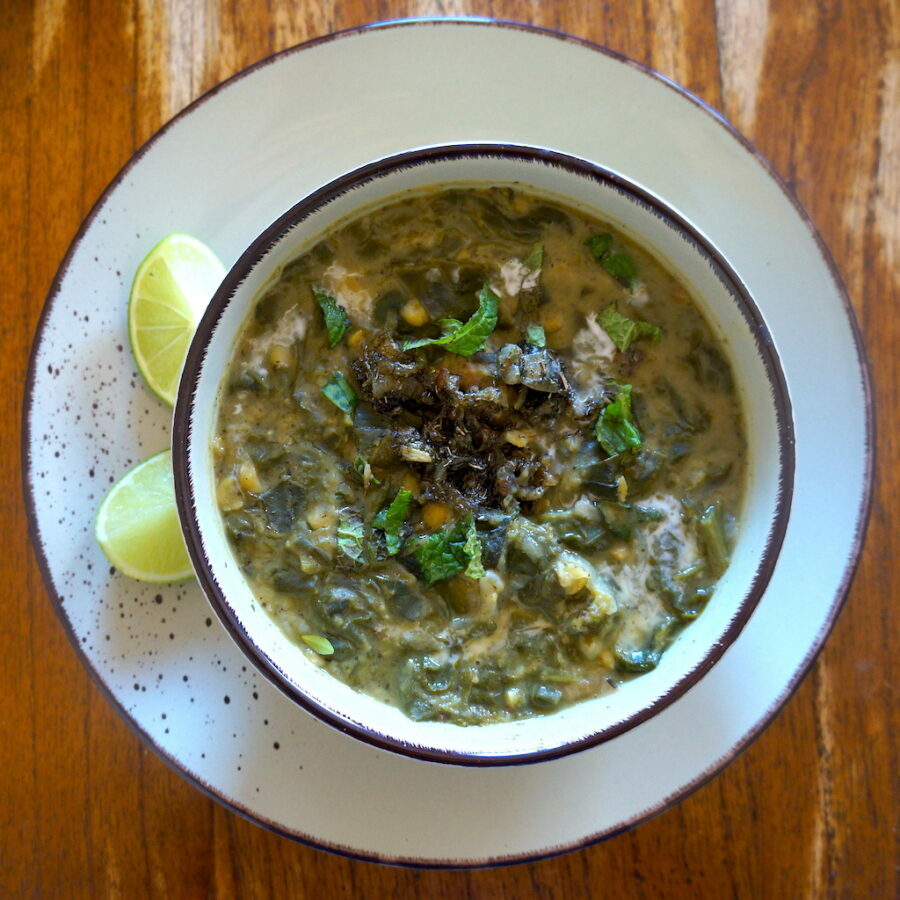 This easy spinach soup is perfect if you are new to cooking Iranian cuisine. Spinach, along with mint, caramalised onion, and sour lemon, are classic ingredients in Iranian cuisine. Spinach plants are thought to have originated in ancient Persia around 2000 years ago. From there they were introduced to India, China, and eventually Europe.

I first came across Âsh-e Sak in Margaret Shaida’s cookbook: The Legendary Cuisine of Persia. The few other Âsh-e Sak recipes I found during my research varied in ingredients slightly but most of them contained three main ingredients: spinach, yellow split peas, and a souring agent. My vegan recipe is an easy, healthy soup that can be served as a starter or main dish.

In Iranian cuisine, Âsh is a thick soup served hot. There are many variations but Âsh-e Reshteh is the most famous, containing beans, noodles, herbs and kashk (whey). Kashk is an important ingredient in Iranian cuisine but it is not vegan. However, in Âsh-e Sak, the thickness of cornflour and tang of lemon juice create a kashk-like flavour. Wonderfully simple and coincidentally vegan!

This Iranian Spinach Soup is thought to have originated in the north of Iran near the Caspian Sea. However, rather than the Persian word for spinach ‘espenâj’, ‘sak’ appears to come from the Hindi word ‘sāg’. This suggests that there may have been a historical influence from India via south Iran. We do not always know a recipe’s place of origin but clues like this remind us that many dishes develop with a range of influences from neighbouring countries. Categorising foods by national cuisine can be oversimplifying.

This soup is healthy, vegan and uses seasonal wholefood ingredients. Yellow split peas are high in vegan protein, while spinach contains iron, calcium and magnesium among other vitamins. The simplicity of this dish makes it easy to cook and healthy to eat, while mint and lemon create bursting flavour.

This soup can be cooked year round, with fresh spinach from your garden in the Spring or frozen spinach in the Winter.

You can also add other dark green leaves to your spinach, such as:

Some Âsh-e Sak recipes include meatballs. I tried cooking mine with vegan meatballs but I decided it does not particularly add flavour to the dish. Also, as there are already split peas, the dish is well balanced with vegan protein already. If you would like to include vegan meatballs, please read this section:

Vegan meatballs can be made in several ways:

If you are using vegan sausages, remove them from the freezer with time to defrost before cooking. Once soft, slice each into four pieces and roll into balls. These are now small, quick meatless balls ready for use in many Iranian recipes.

To cook the vegan meatballs in Âsh-e Sak, remove the fried onions from the pan, heat a little more oil then fry until crispy on the outside, turning occasionally. They don’t need to be cooked right through, as you will add them to the soup to boil along with the onions.